My name is Pixie, and I am the Server Licensing Manager at OWI. Welcome to our ninth edition of the server spotlight. This feature will highlight some of the community servers that we think you may want to check out, share information about them, and show what they are up to or where they excel. All of the server descriptions and details have been provided by the community run server owners themselves!

Green Mountain Gaming was started a little under two months ago after a group of like-minded players from another squad community decided that they wanted a change. And you know what they say” if you want it done right, do it yourself.” The naming of the community comes from my personal love of the Green Mountains in the State of Vermont and the Green Mountain Boys of revolutionary war legend. From day 1 we have been able to fill the server daily and have exceeded all of our expectations in being such a young community. With our group of over 20 closely knit admins, with tens of thousands of hours in the game, we are excited for what the future holds and what we can bring to the squad community.

Squad is something truly special in the gaming community. It is really the one true modern military-style tactical shooter where the ability for a team to communicate and use assets appropriately can make or break a game. With recent graphic updates, this game is also one of the few of this scale where beautiful map elements can also be useful cover and concealment and realistic feeling gameplay.

Green Mountain Gaming is great for so many reasons! First and foremost our goal is 100% satisfaction for every player on our server. We believe that a big part of this is being active and involved with our players. When you come to our discord our admins will never be hidden away and enjoy when public players join to chat. Another thing we pride ourselves on in gMg is having changing rotations every 2-3 days and running layer rotations and maps that are player and admin submitted! However, we don’t post our rotations. We believe that people liking a certain map or layer is very subjective. Variety is the spice of life and we have found players have been having more fun than expected on layers and maps that have bad reputations.  Players on our server can also have almost any problem fixed immediately by any admin. Our structure is different from many other clans in that any admin can do anything that the server owner can do.  We do not have a special rank structure, we are all equal, and all decisions are made as a team. Squad is a team game and we take that to heart in how we run gMg.

When I joined the server I received a lovely warm welcome from the community enjoying the server. I joined a squad, where the squad leader was also using an armored vehicle, but with style. The squad leader used the vehicle to support infantry getting into an objective, I have never seen this before and it worked really well. The squad leader, who is also a member of this community came across as very passionate about using vehicles with infantry. I highly recommend visiting this server.

Our community is built on dedicated people who want to create a fun and safe environment for all players to enjoy! Squad differs from regular multiplayer tactical shooters in that it focuses on team play. An authentic sense of battle leads to tactics, coordination, variety, and stress. The gameplay and atmosphere it offers are really enjoyable.

Although, as an administrator, since we opened the 2nd server, we cannot play the game very much, it still gives us joy to see people happy on the server. We cooperate with senior clans to develop our community. In this way, clans operate in high quality and also help the new players. The environment we offer on our public server works with a team of experts in the field to organize organizations such as external innovative events, clan tournaments, etc.

In January 2021, we organized a major tournament with the participation of 16 teams in the “European Squad League”.

We are trying to provide a global environment where Turkey and other European countries can participate so that not only team play but also players who are not part of any clan can benefit from the events.

I received a very warm welcome when I joined this server, the squad leader used English to communicate with me. They translated what others said so I could understand and gave me tasks in English. The players were very focused on the game but were also very kind to speak to me in English as well, although the server caters for Turkish-speaking players. I do highly recommend this server.

How Not To Play 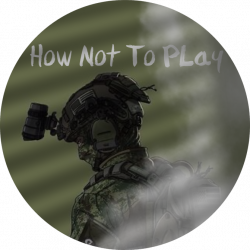 We started from a few friends playing the game, then we kind of decided we wanted other people to have as much fun as we did, and give that type of player a home!

The player base is such a wholesome bunch of people (from the most part), from getting help with commands on the server, to branching out and networking between teams, we’ve genuinely made a lot of friends on this game, and we couldn’t have done it without the community spirit, and feeling welcomed.

Just how diverse we all are. We have members from every single country, getting along and having fun in a game. We allow people to speak their own languages, and we also try to learn those languages to make people feel welcome. Our community really is based on friendship, and it shows during gameplay.

When I joined this server I received a nice warm welcome, the players were very focused on the game during my visit. The members of this community were very supportive and they supported the new players that joined their server. I would highly recommend this server.