Welcome to another edition of The Wrench, your monthly dose of information delving into some of the hottest mods that are being worked on for Squad by the modding community. Considering that the modding SDK had some troubles with a shadercore crash that was preventing a lot of modding potential, it’s great to see such fantastic contributions already coming through and being worked on.

Take a read and if you’re interested be sure to follow up with them in their community areas so you can give them your feedback or co-ordinate a time to really put these mods through their paces.

First up we have a map from BaronVonBoyce, one of the modders who worked on the CAF DLC, and now part of Redstone Interactive working on Beyond The Wire, who in his spare time has whipped up this scenic map – be sure to check out the stunning trailer as well! 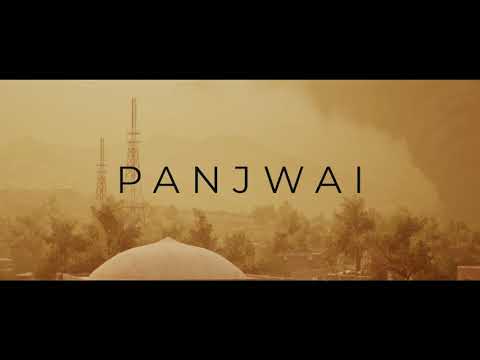 The Panjwai District is located southwest of Kandahar City in the Kandahar Province of Afghanistan. In the early 2000s, this area saw heavy fighting between Canadian, American, British, and Dutch forces against Taliban insurgents in pitched battles and ambushes. The river valleys will feature interconnected networks of canals, mud-walled vineyards, and compounds with lots of cover, concealment, avenues of approach, and a wide variety of possible capture points.

The more arid high ground of the map will contain a large double-highway that stretches from one end of the map to the other, mountain villages, underground tunnels and complexes that the unconventional forces can use as strongholds or to move quickly and safely around the more open areas of the map. Next up, we have a map that many should be familiar with across different time periods, as it is one of the most popular and well-known maps from the Battlefield franchise, Wake Island. Gunslinger and OC2901 have more details below or visit their workshop page here. 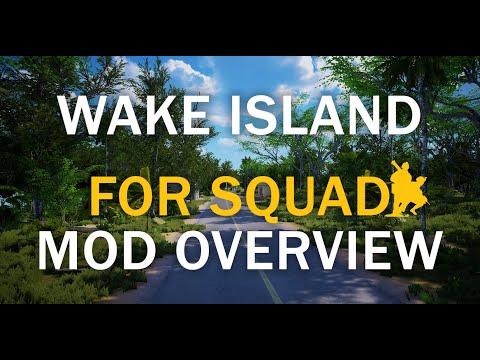 After a lot of testing, we finally released Wake Island Map for Squad. We will apply for Whitelisting and inform you if the Map gets Whitelisted. If we’re extremely lucky or talented we will get drivable RHIB Boats on it someday.

Info about the Map:

This is Wake Island, this is not Battlefield! We aimed to make a replica of Wake Island as it is used by the US Armed Forces today! Wake Island Serves as an Airfield in the Middle of the Pacific Ocean and as one of several THAAD Sites to Protect the United States against Ballistic Missiles.

The Map is 8x8km but features a lot of Water and Carrier Spawns for Helicopters.

Gameplay Wise this map is kind of a Meatgrinder with options. If you just use Ground Forces it will come to Meatgrind Points, if you use your 3 Helicopters strategically you can avoid that.

Info about the last Updates:

The latest updates have been mainly performance improvements, this map should run now even on low tier machines with decent framerates!

Following Gameplay Layers are Included as of submission:

Be sure to feedback to the modding crew on their Community Discord Server over here: https://discord.gg/8nhURxU “This week we’ve welcomed some new members to the team, finalised some textures and got started on the animations for the FRF2. More information can be found in our latest WIP, update #22 here The Bundeswehr Mod Team are back with a huge update to share with you all, make sure to check out their full progress report on their site here, as well as to see if you could help them by joining their modding team, or perhaps, consider joining their Discord server to give them your feedback https://discord.gg/TwBGeGx

wow. Just WOW. Our team used the last 6 months very well! This month, we proudly present our progress in weapons, characters, vehicles, and FOB assets. Our new German faction is well on its way and we are working on nearly all items of our development list by now, which is awesome in my books – we are on track and our goal to release at Q3 of 2020 seems legitimate.

First I want to present to you our new and specific German FOB assets and props. We are aiming towards a clear distinction of our FOB stuff to what is there with the current vanilla game. Apart from using correct tactical signs, you might spot one or the other German flag on our gear. 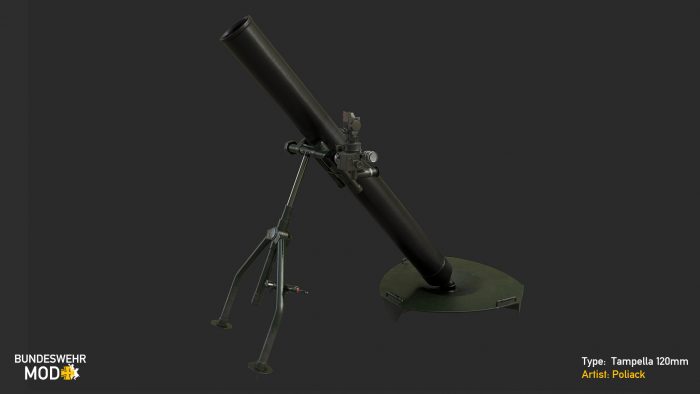 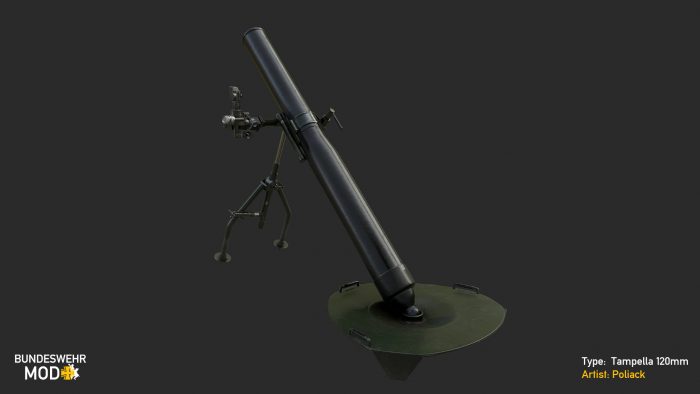 Poliack finished his 120 mm Tampella mortar for the Bundeswehr faction. He added a crazy detailed mortar dial-optic and proper textures. Brace for impact! 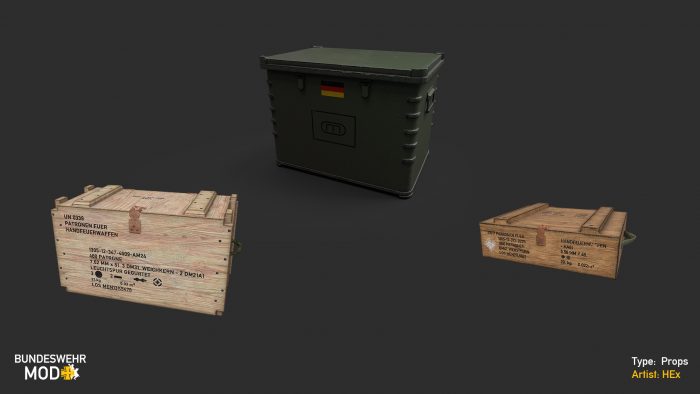 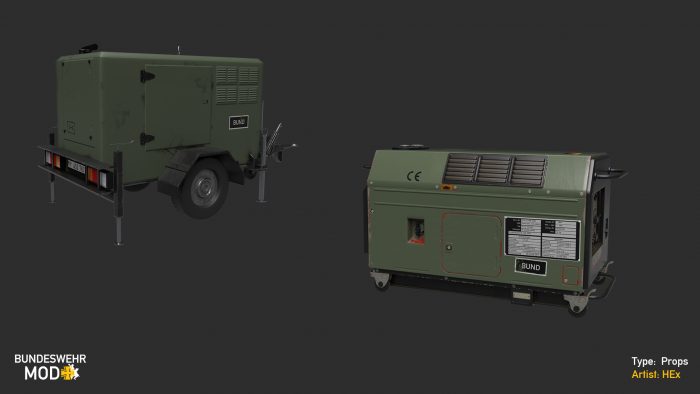 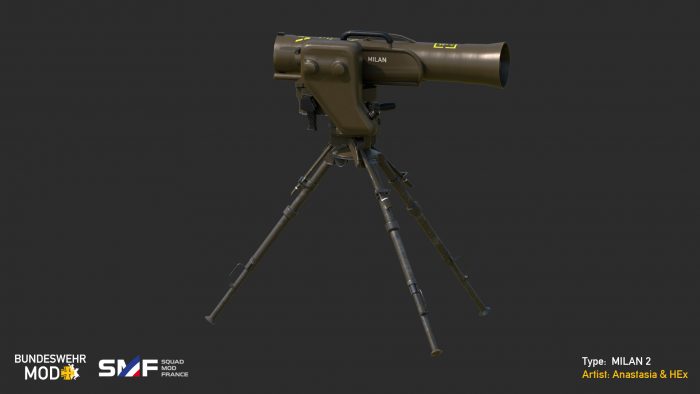 As you can see, the MILAN anti-tank wire-guided missile is a common project of the BW-Mod Team and the French Foreign Legion Team. HEx reworked Anastasias base model, added new tripods, and added new textures to everything. Since there are no IR / thermal optics in SQUAD, we removed these specific parts. We hope to continue our cooperation with the FFL Team and you can be excited for more to come from it soon.

Our boi HolyLordJesus began his work with our character models and their IDZ Flecktarn uniforms. Of course, it is a WIP, but we felt like showing it to you with this update. Especially the snow Flecktarn character will be changed a lot since our military advisors gave us valuable feedback for it. Anyways – an awesome job from HolyLordJesus so far! 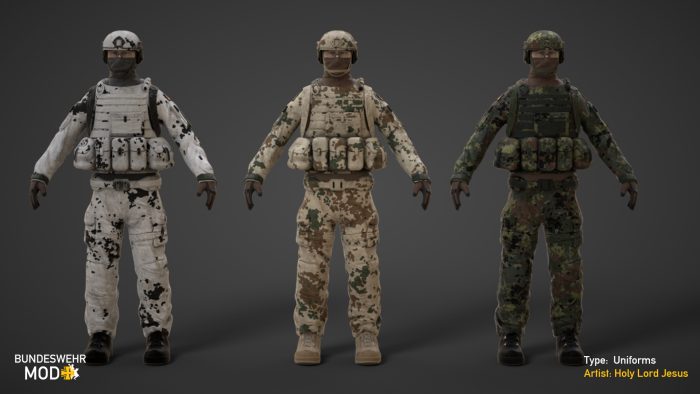 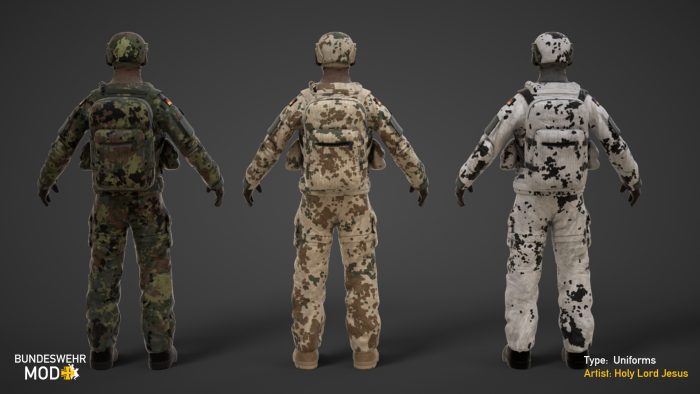 Another awesome update regards your tools for getting the job done as a gamer: Weapons. This time around we are getting into weapons, which are mostly used by specialized soldiers, like the engineer (AT-Mine DM31AT), the crewman (H&K MP7), the marksman (H&K G28) and the German sniper rifle (G22). 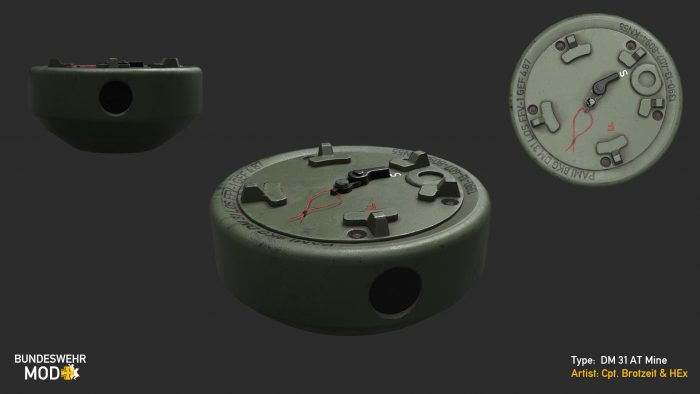 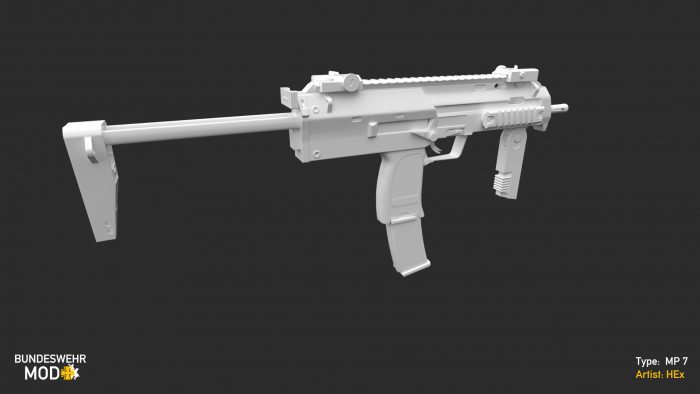 Cpt.Brotzeit modeled the AT-Mine completely, so you will see the correct arming process, once animations are done for it! Again, thx to HEx for his modeling and texturing skills with the DM25 smoke grenade and the H&K MP7 (yes, it got the 40 round mag). Kirusha shows us his modeling progress with the German sniper rifle G22 as a so-called whitemodel. You might remember kirusha as the creator of the CAF sniper rifle and you would be right to do so. Thanks for your art kirusha_love! 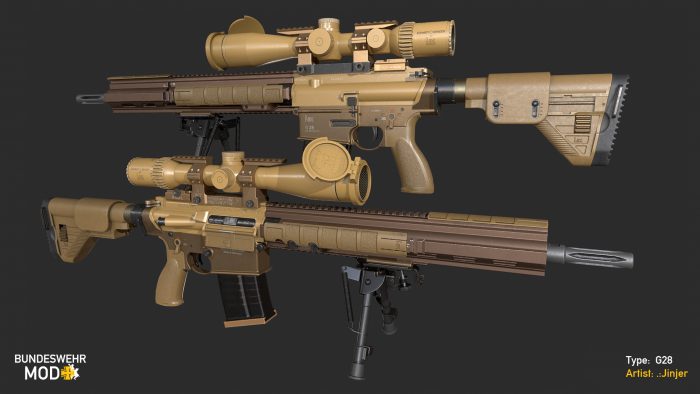 And of course our .:Jinjer, with his brand new H&K G28 in tan – the main DMR of the Bundeswehr. It is… just perfect. Also, thank´s to .:Jinjer for his work – keep it up, buddy!

Also, a massive update with our faction vehicles awaits you: We present 3 vehicles today! If you follow our posts at our discord, you already know about HolyLordJesus update for the finished transport / loggy truck HANS 5T GL. He showcases here our “four seasons/biomes” camo patterns for the Bundeswehr vehicles: Borreal Forest, African Savanna, Polar Winter and Desert. All vehicles will be dressed accordingly once finished! Our [FWF] Toby delivered the first finished whitemodel of the German Dingo 2 MRAP. Looks great, doesn´t it? Weapons are coming soon. Keep it up Toby, we are all hyped! 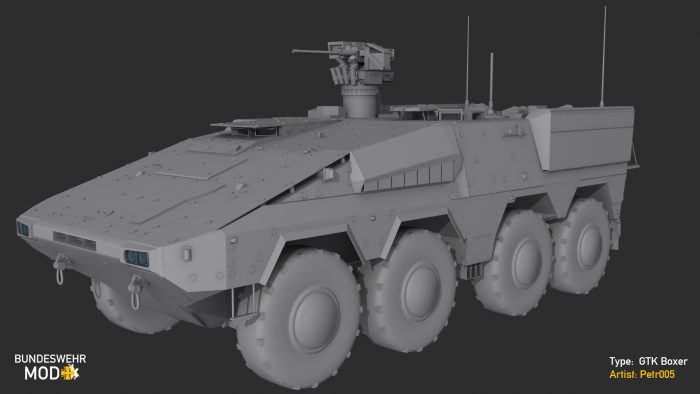 Petr005 managed to finish the GTK Boxer with its FLW200 weapons station and presents an extremely detailed whitemodel for it as well. Textures are already in the works and should be presentable in a month or two. As a Jäger and Panzergrenadier veteran, I am very pleased with what you did here Petr005. I guess everybody is already itching for your upcoming PUMA model. 😉

Another Wrench regular, wunda, has dropped in to let you all know about the progress they’ve made on Harju since we last saw it. wunda has even gone to the trouble of including an extensive overview of the changes to the map and what you can expect if you haven’t played on Harju before. Go get it!

If you’d like to give it a whirl, head over to Harju’s workshop page here 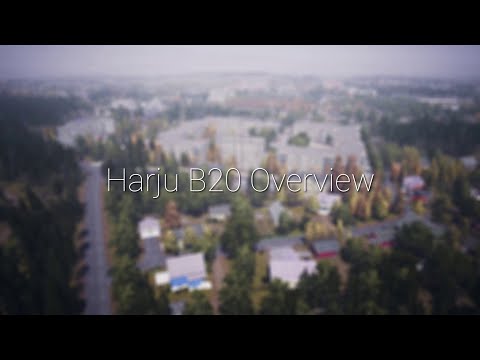 The first major content update to Harju is released. Featuring a complete rework of its foliage and lighting, combat in Harjus’s new thick forests will test even the best Squads. 12 new capture zones, 12 new layers, and updates to old locations serve to fill in the the previously sparsely populated western half of the map. Harju is updated, whitelisted and ready to played on B20.

Part of our previous Wrench post, SPECTR_Eternal is back with some new changes to Operation_Downpour and some big news as it’ll be packaged as part of the Athena mod soon. Why not give it a gander over here. 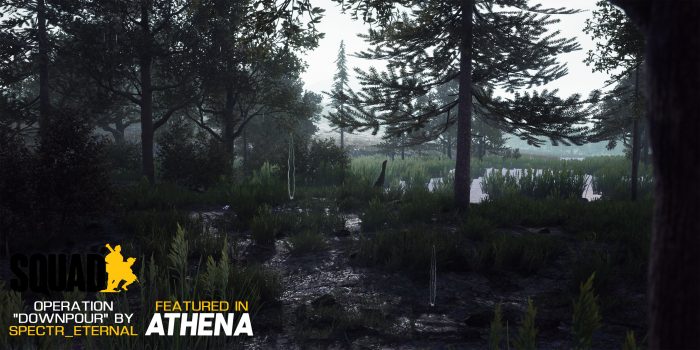 OP_Downpour is getting more development time, and more projects start to get interested.

This time around, Athena Mod expressed their wish to collaborate, so OP_Downpour can be expected to hit the Workshop not only on its own but also inside the Athena Mod package.

There might be yet another collaboration event tied to Athena, and it just might include some spicy Armored Vehicles, Right? But it’s a little too early to tease.

We’ll be finishing off this Wrench with another entrant from last month, though this time, the [SAM] Clan is back not with a map, but a new events mode mod to help take things to a new hardcore level of play, read on to know more and make sure to check out their site and community Discord to get more information. Who said we only worked on the Gaza mod? we have also been developing our events mod, remember Al Basrah night? Yeeeeeeeah we are back with two variants of Yehorivka night, one for Tallil Outskirts and Kokan, where we added the following:

– Head, side, back, interior lights, police lights and the seal team trident on the M-ATV

– Also we took the sights off the Rpg and all 4x scopes from the US, RUS, GB

– All the US, RUS weapons have tracer rounds

We are also working on night variants for all the maps. And how could we forget about the Gaza mod 😉 ! in the upcoming Wrenches you will see big developments thanks to the anticipated updates mentioned on the roadmap. So stay tuned guys for the next Wrench, until then you can join our discord for more mod updates : https://discord.gg/gHaJkTJ .. be safe and stay away from Corona ^_^

That’s the Wrench for the month of July, and I’m sure there’s something there that will tickle your fancy. If so, be sure to let the creators know what you enjoy the most about their work on their workshop pages or in their community Discord servers as feedback is one of the most crucial aspects of creativity.

If you are a modder yourselves, or part of a modding community and have a Squad mod that you’d like to see featured here on The Wrench, follow this link to submit details so we can take a look at the fantastic effort you’ve been putting into some of your creations.

Have fun everybody and stay safe.