We’ve made it through another month of amazing modding! As always, the best and brightest have sent along the latest updates on their work and we’re stoked to see what everyone has been up to since March. We’ve even got an update from the French Foreign Legion team! So, without further ado, let’s Wrench! 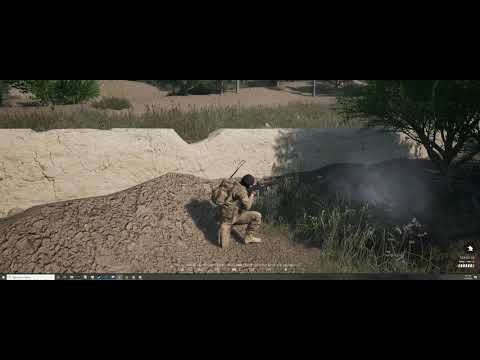 Middle Eastern Escalation is, first and foremost, a gameplay modification focusing in on Squad’s combat. Bigyes isn’t content to stop there, though! 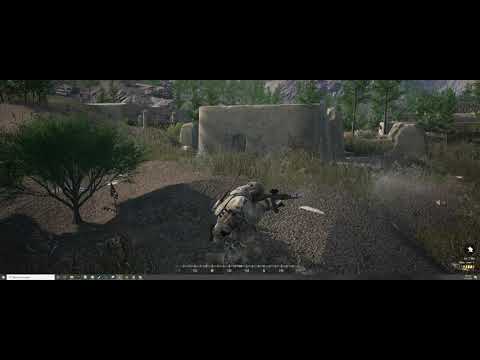 The next version of the mod will include new custom character models for USSF, RuSF, and the brand-spankin’-new PMC Faction. 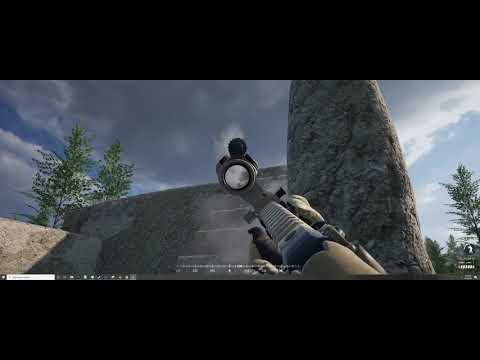 Primary and secondary weapons for each faction will be getting some love as well. All characters and weapons are still a work-in-progress, so be sure to check back to see how they evolve. It’s going to be a wild ride! 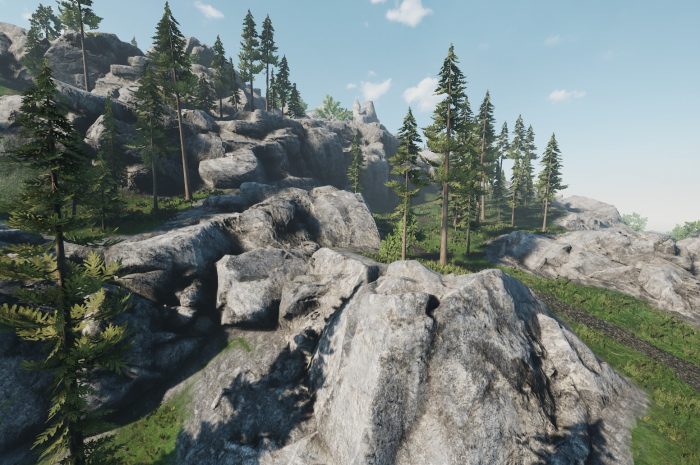 There’s been quite a lot going on since our last visit to Finkarus! First and foremost, LoRDHitMan has been flattening out the nothern mountain to reduce the amount of corridors, as well as allow for more flanking. 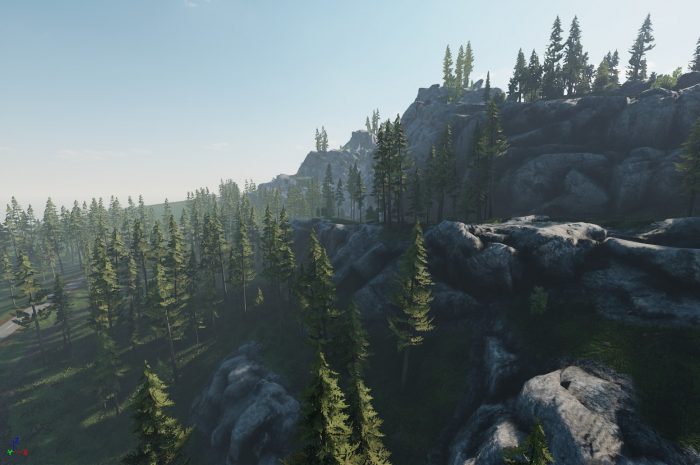 He’s also replaced the meshes of spruces, so the forests are being repainted all the way over to the brand new swamp between two mountains. 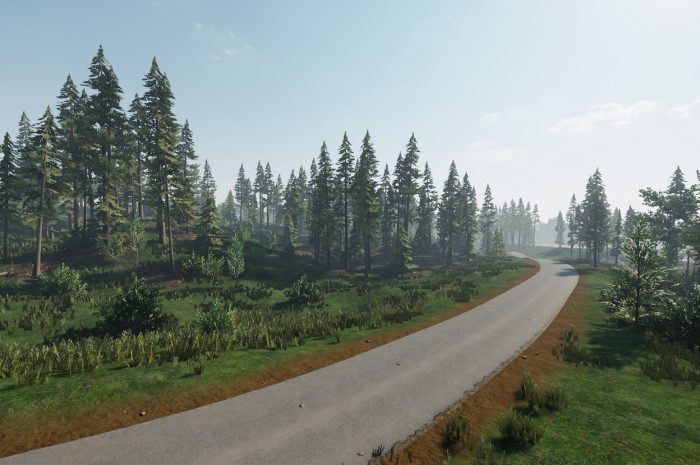 Work has also begun on “Evarihino,” “Factory,” and, “Resort” locations. The last two were inspired by Tarkov with the goal of recreating in UE4 on a larger map with better performance.

Last, but not least, the game mode has been switched to Territory Control. You can snag Finkarus on the Steam Workshop now!

Wake Island by Gunslinger and OC2901 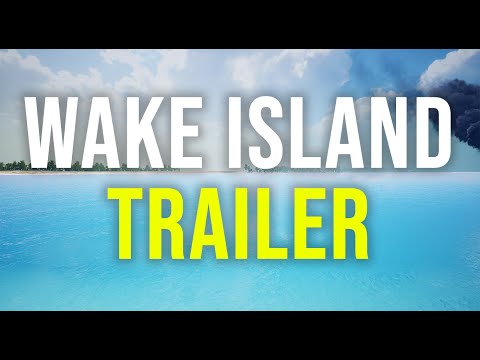 The dynamic duo of Gunslinger and OC2901 aren’t idle while they await the release of Beta 19. In fact, they’ve been pretty dang busy putting the spit and polish on the latest and great incarnation of Wake Island. 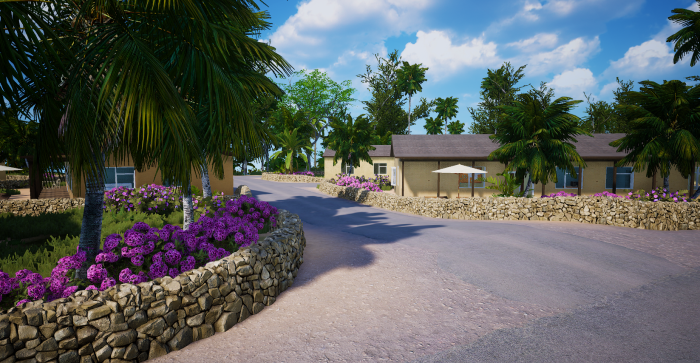 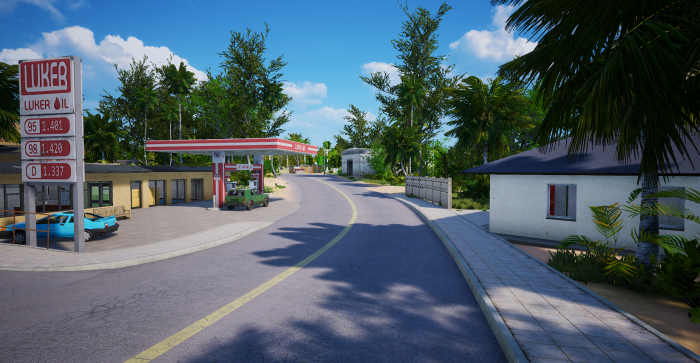 Clearly a stunning map at first glance, they’ve sent along a batch of screenshots that really highlights the diverse points of interest Wake Island will have to offer. From the modern petrol station to the mouldering bridges, each area is going to present unique tactical challenges. 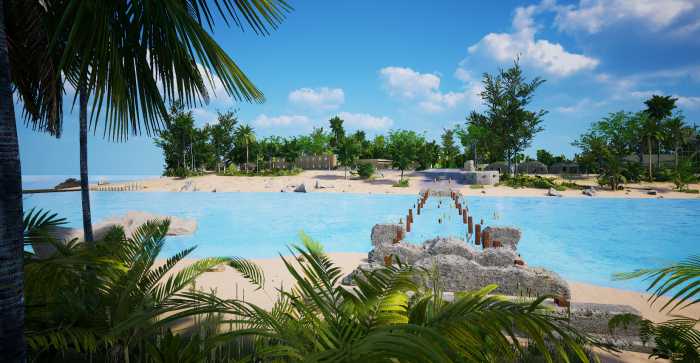 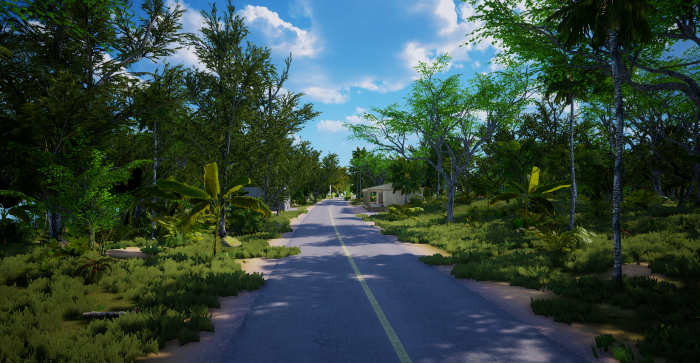 In case you’re curious how the map stacks up to the real world location, they’ve included a handy (if large!) comparison.  Be sure to hop into their Discord server for the latest updates on mod development. Well, hello there, beautiful! We’ve just received the latest triptych on the Road from Muttrah, which just so happens to include a lot of Muttrah itself. You’ll notice Cripion101 has been hard at work polishing off the docks, suburbs, and the construction site. Next up was a significant portion of the inland area to improved landscape materials and terrain. Cripion then turned a deft hand toward lighting and environment effects, which are looking mighty fine, if the Wrench crew has any say-so in the matter. Featuring a new procedural foliage system, we’re returning to the gloriousness that is Gradac! Hawken has been hard at work bringing the Eastern European-themed map to life with a mix of different environments, creating just the right amount of challenge for aspiring leaders out there. The next update should feature more work on the Points of Interest like the farming villages and logging sites. Stay tuned for the next drop!

With the first community tournament ran on ProMod (Squad Rivals) just finishing up, the ProMod Team has spent the last couple of months working closely with the teams, casters, and officials involved to provide the best possible competitive squad experience.
Getting the mod into the hands of casters and watching all the streams meant they were able to get some really valuable feedback on our casting tools and how they are used under live fire conditions. Nearly every aspect of our UI has been cleaned up and expanded upon, most notably the killfeed. The enhanced killfeed now shows which vehicle performed the kill and which round was used, so you get all the gory details.

As the tournament has progressed, they have also utilised the mod to help provide as fair and even playing field as possible. Fog has been decreased on most maps to ensure players weren’t using third party tools to see further than intended and enabled server side logging of players who modify their config settings to gain an unfair advantage. Working closely with the Rivals staff to provide them with the means to catch any cheaters should benefit everyone who uses Promod!

Lastly, they’ve spent a lot of time researching and working on our lighting setup and are currently part way through rolling out Standard Lighting 2.0 across all their layers. If you’d like to get involved, or simply like what you hear, hit up the Squad ProMod Discord asap! (You can also find Squad Rivals here.) You’ve been asking and they’ve delivered! Tactical Collective Modding has sent along a beautiful update to the French Foreign Legion Faction. Now that real life is out of the way once more, the team has reorganized and production is full steam ahead. Work continues on their Mali map, as well as with the implementation of the semi-vintage French AANF1. Not content to stop there, they’re Frenching up a little bit of NH-90 chopper! You can find more art and images on their website.

Ramiel – Black Hawk Down by Noxxid3

After a small break on Ramiel, Noxxid3 is back to the grind with a fresh, new update! (Don’t worry: he was busy working on side projects, so you’ll have other goodies to drool over too.)

While he was off improving other lands, he took the time to do a bit of a study on the landscape, looking for a way to re-visualize Ramiel. He plans on redoing a lot of the landscape, as shown in the screenshots.

There’s been a lot of work to re-sculpt current assets to the landscape which, as we can see, is paying off well. Aww yiss, it’s time for another wunda-ful update! This month, as you may have guessed from the screenshots, we’re returning to Harju. This month Harju receives an updated version of a classic objective: Yehorivka’s old Storage Site. Finding a new home on Harju with a fresh coat of paint, the ol’ site is looking better than ever. Serving as a military storage installation in support of the nearby airfield, the locations added should bring interesting infantry fighting familiar to long time players of Squad. New locations added in the last month also include; a lighthouse, an underground ordnance warehouse, a set of nuclear missile silos, and an 18th-century star fort. Midnight Interactive is just about done with the Aussie Mod and have sent along some shots to show off their most recent hotness. As the development on the mod comes to a close, they’ve opened it up to all-comers: simply head over to the Steam Workshop now! If you’d like more information, found a bug, or just want to hang out with some like-minded squaddies, head over to their Discord server. A new month brings new surprises from the [SAM] Clan! Kicking off their latest update right, they’ve sent along two freshly remodeled, new soldiers (“The Gaza Mod Lovers”): HAT and the Marksman, which they’ve nicknamed “The Black Ghost”. Looking more and more amazing with each update! Next up, they’ve included some delicious new upgraded vehicles to haul your butt around the battlefield. Say hello to the Q20 Rocket Launcher. And yup, that’s a total of TEN rockets to rain down hell. Better yet, it’s modeled after a real vehicle! [SAM] Clan wants you to know there WILL be explosions. Oh boy, will there be explosions. If you’d like to learn more or get involved, you can head over to their website, or join their Discord server now!

Unfortunately, none of the mods come in a blacklight poster version, but we’re not going to rule it out for a future Wrench. Puff, puff, pass that content! Which mod looks the hottest to you? Sound off in the comments!