What a weekend, eh? Hopefully, you had a chance to join us for the StackUp Call to Arms 2019! If you didn’t, be sure to check out the SquadZ and Squad Ops segments to see what modding can really do. =) We’re also keeping the donation drive active for a while, should you find yourself with a little bit of spare dosh for the holidays. A big shout out to the modding community that helped make it happen! 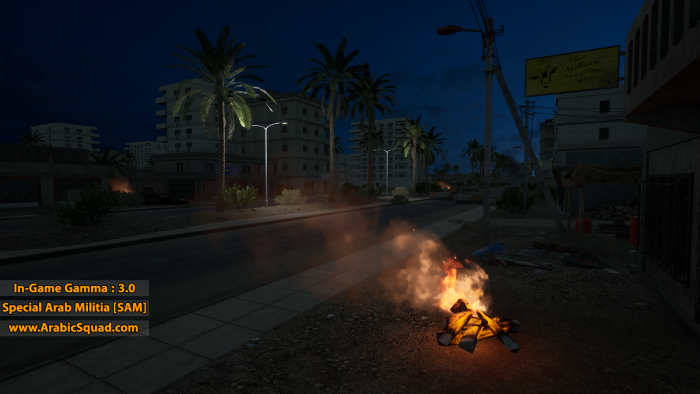 There’s certainly been a lot of stir lately about night maps and, rightfully so. Who DOESN’T want to see their favorite maps at night? Enter (silently): Ninja With Katana. 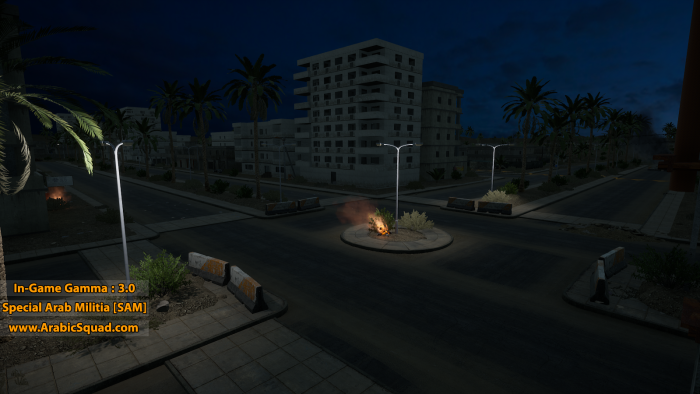 While the big news here may be Al Basrah at night, there’s no shortage of reasons to check out the mod package from the [SAM] Clan. They’ve got a training map in there as well! 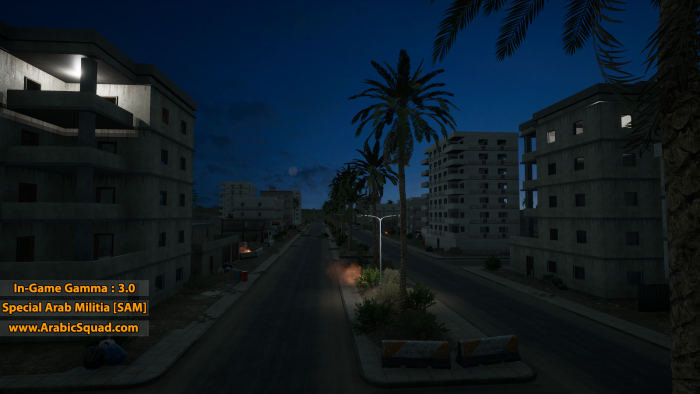 Picking up the mod and familiarizing yourself with night time ops may help you get a leg up in their Al Basrah Ambush event. 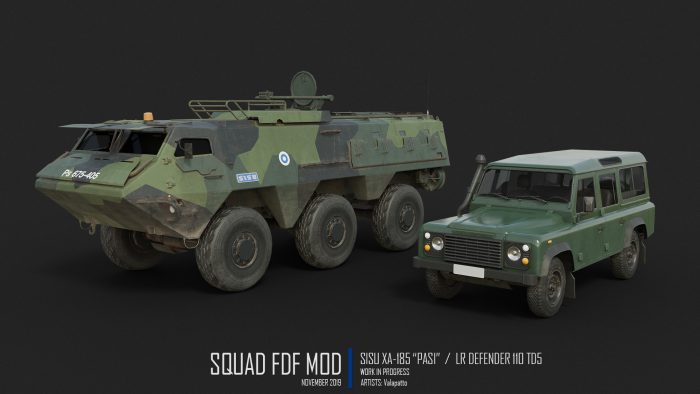 As the nights grow long and cold, a true modder knows that you can ALWAYS make your CPU a little harder to fix both problems! The FDFMod Team is buckling down to make it through the winter by kicking out a brand new update. 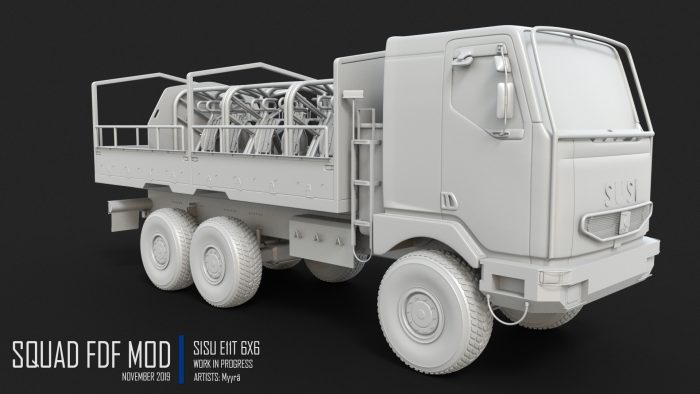 This month, they’re showing off both new vehicle and character models. Some fresh new paint has been applied to the XA-185 and the Defender, with the Sisu “Eemeli” truck not far behind as it approaches the end of the high-poly modeling phase. 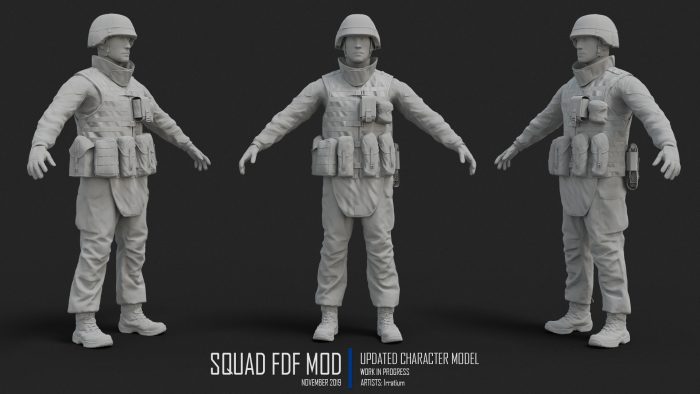 Last, but not least, their custom character models are steadily marching toward the finish line themselves. 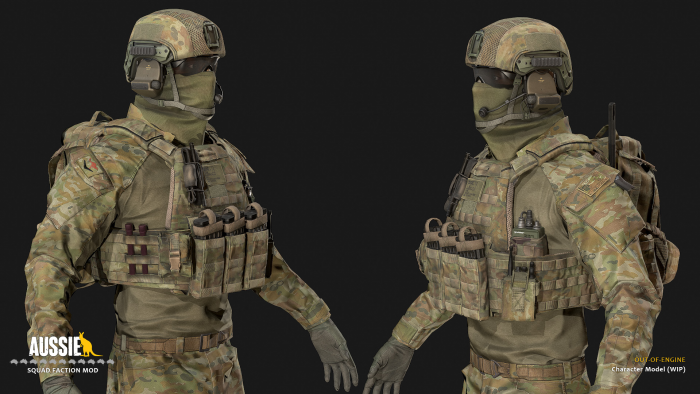 Our monthly tour of the globe brings us back to another one of our favorite locations (and mod teams): Australia! While the Finnish team may be getting ready to hibernate through a long winter, we can see the Aussie Mod Team is still heating things up Downunder. As you can see from the latest screenshots, their character art is nearing completion. If you squint and get close enough to the monitor, you can almost see the individual strands of dingo hair. Wow! 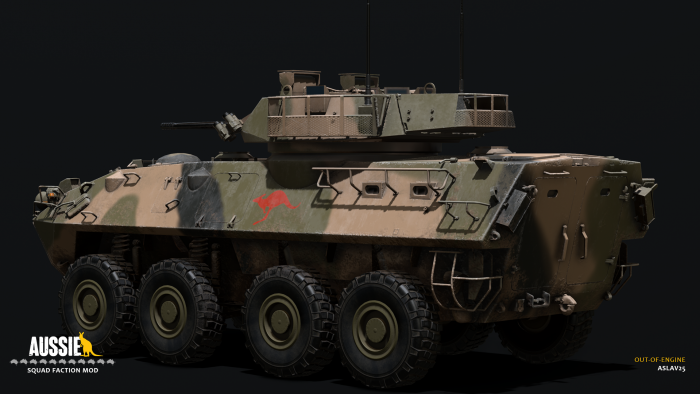 A bunch of lads with such stunning good looks are going to need an equally stunning ride to match and, once more, Australian hospitality provides. Check out their latest ASLAV25 shot! Last, but not least, they’ve left us with a video of their map, Operation Anaconda. 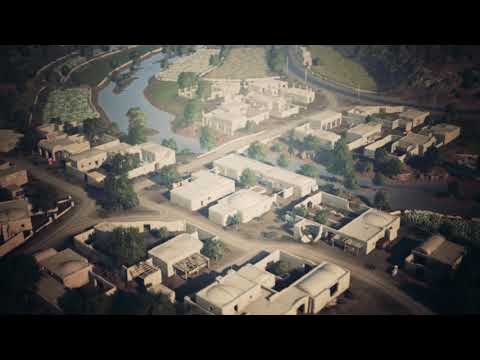 If you’d like to help the Aussie Mod team, or just offer some feedback, be sure to join their Discord server for upcoming testing opportunities! 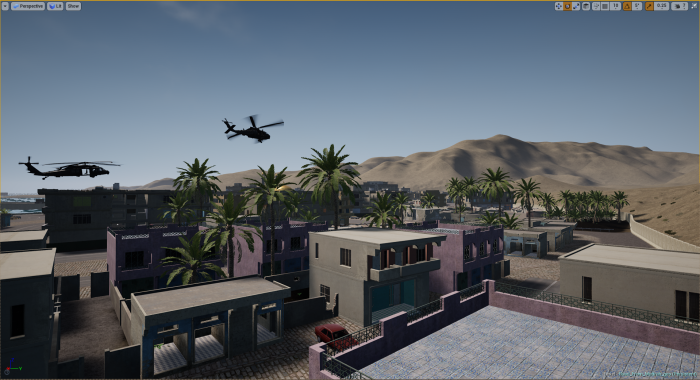 With eyes on the newly-released helicopters, Cripion101 turned their focus on to something that should be music to the ears of any PR veteran: The Road to Muttrah. The new version aims to expand on the notably solid base of the original PR map to bring it up to a full 8×8 km battlefield based on maps of Muscat. 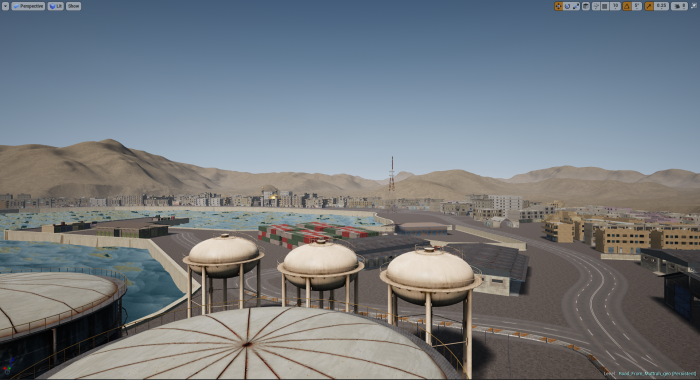 The expansion allows more space for tanks by including surrounding deserts, mountains, and nearby towns. Squads should be prepared to shift gears from long-range combat to more intimate fighting as they near the core of Muttrah. Cripion101 hopes to add an emphasis on infantry, transport, and smaller vehicles which should require teams to make expert use of technical, MATVs, and, of course, those beautiful choppers to succeed. 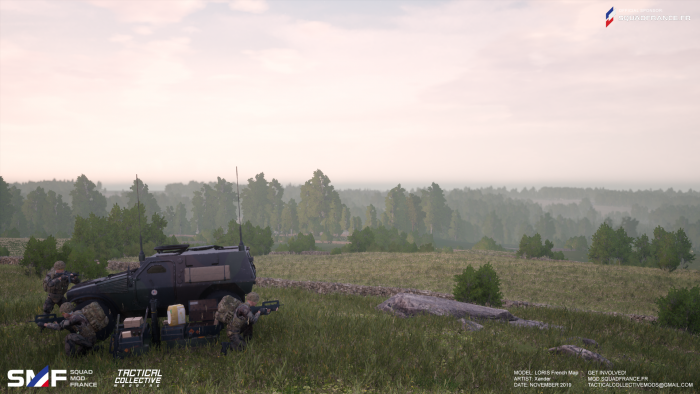 No trench-ready unit would be complete without some heavy machine-gunning, so the FFL folks have also included a work-in-progress shot of their ANF1 by Drkoliche. It will be part of the Heavy Machine Gunner role, as well as being found atop the VBL. It should be nice and deadly!

Recently the host of a Fused Legions fragfest event, Adawia Park is getting put through the paces and coming out all the better for it! We’re excited to hear what Johan Svundkist has to say about their wonderful creation:

Featuring a dense urban area inspired by a real Syrian Park, Adawia aims to bring a hint of verticality to an already dangerous battlefield. The added threat of danger from any angle should definitely keep squaddies on their toes and looking for trouble. Both Militia and Insurgent teams will need to make liberal use of rooftops and underground shelters to navigate their way to a win. Be sure to pick your path wisely and cover your squadmates: the enemy could be lurking anywhere. 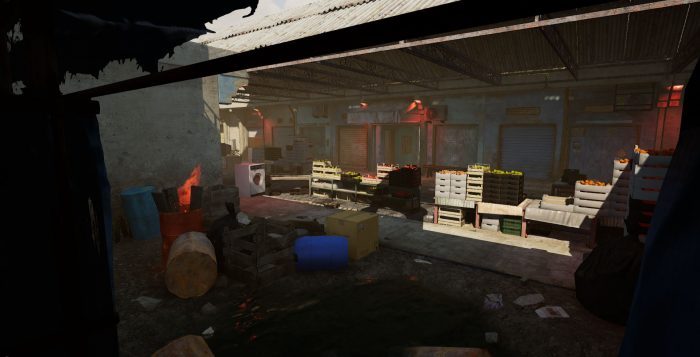 The next steps include enlarging the map to include two new main bases outside the town, with an aim to reduce camping. A labyrinthine network of sewers has also been added to the city to allow flanking — assuming you can find your way to the objective! 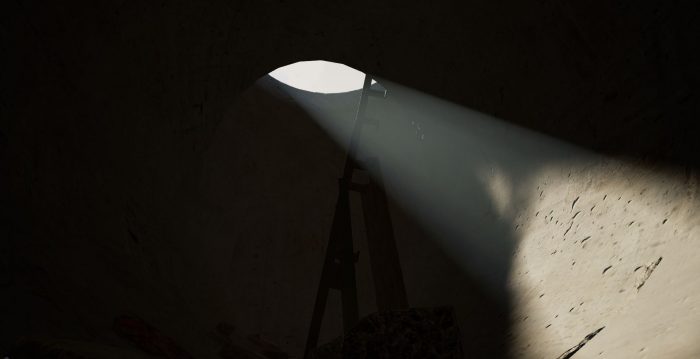 One last change to be aware of: the rally point radius has been lowered from 50 meters to 14 meters, making sure you’ll have some up close and personal encounters. And we’re back to Finland! But you’ll find no complaints from us, especially when it comes to updates from Wrench-favorite Hawken. Although Gulf of Finland was recently released, Hawken wasn’t quite happy with how things had shaped up. Now we’re getting a complete rework of the terrain to add more detail and make everything a bigger. (And better, obviously.) 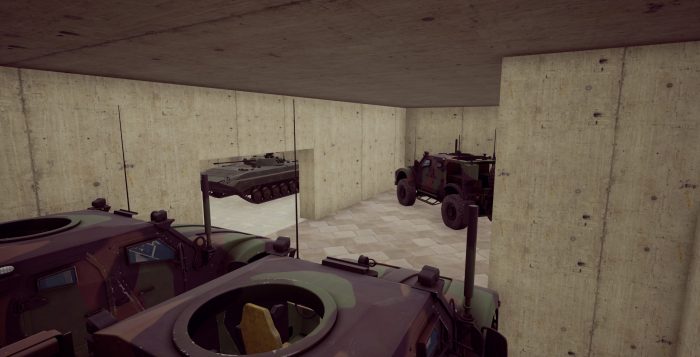 The update will bring over 2 kilometers of tunnels, more detail to every island, and improvements to both the visuals and gameplay. We’re definitely excited to see Gulf evolve as more and more people experience it! 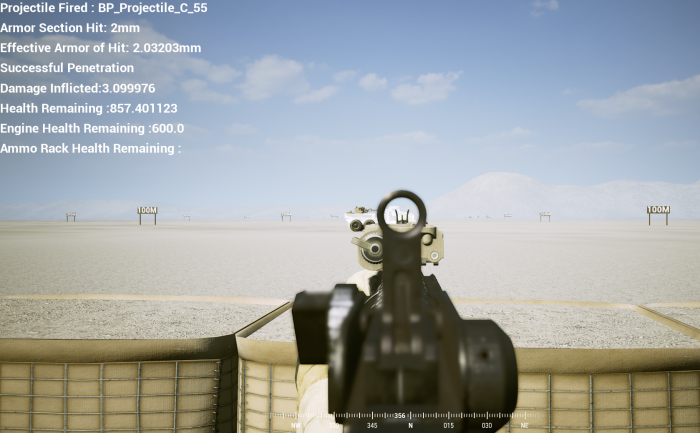 Squad’s very own mad scientist, Bill Nye, is graciously opening up the lab to share some of those secret goodies. The Lab sets out to answer the question, “Much much does x do? Where do I find y? Can I taste it?” The last answer is always no, but bless your heart for trying. How does Chez Nye set itself apart?

The Lab will be similar to Jensen’s Range with much more information, more accessible than the SDK. There are also handy utilities like being able to clear vehicle wrecks to help alleviate logging into a field of burning wrecks, as well as more tutorials and gizmos to come. 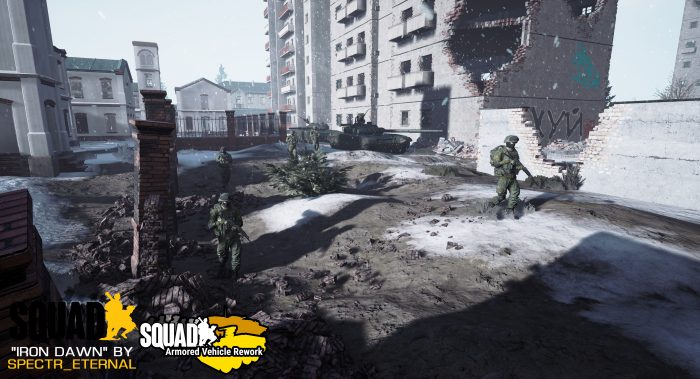 SPECTR_Eternal’s diligent work on Iron Dawn continues apace, with previously teased points of interest becoming much more fleshed out. In the middle of town, a park stands frozen in mid-construction as war has ripped through the area. Further on, a battered city block is a testament to the brutality of recent artillery strikes. Spread across the biggest towns of Iron Dawn, you’ll find monuments to the war heroes, built just before the outbreak of renewed conflict. Just be sure to tell your newbies not to call out the shiny boiz building a pond FOB. He notes, in closing, that there are some fresh Easter Eggs scattered about for the sharp-eyed squaddie. Originally a Project Reality map by OkitaMakato, Noxxid3 was overjoyed to learn he’d have a shot at remaking it for Squad. Always one of his favorite maps, he’s set to work on the city, which seems to be increasing more and more with each day.

New buildings, possibly new areas, Ramiel’s development is going well. (Though he hasn’t forgotten about Black Gold, of course.) Noxxid is also creating new soundtracks for each map. He’s also switched to Mutaha’s materials recently and finds it a most satisfactory experience. Can’t wait to see what’s next! Sweet! We’ve got a progress update from the Bundeswehr team courtesy of[DSK] LieutenatK! Fulda Gap, their current mapping focus, is coming along very nicely. The team is currently adding a LOT of new Central-European style homes and props to the SDK, maybe of which are based directly on their real-life counterparts from the Fulda region. If you’d like to learn more, or get involved, be sure to join their Discord server.

Always love a globe-trotting Wrench, whether it be the factions or the teams themselves! We dare say there’s some of the best this month! What do you think?