It’s been a while coming, but we have the full list of changes coming to Alpha 13!  This patch grew to be a mighty one, having started at upgrading our Unreal Engine from 4.16 to 4.21 — no small jump! With it comes all sorts of new tools and updates to the engine that’ll benefit Squad, but there’s plenty of content landing in this update as well. We’re introducing new vehicles (and components!), a brand new role, new and enhanced modes, and all sorts of changes to systems and mechanics — including the return of ticket bleed.

Please note, you will need to uninstall mods to prevent crashing.

Tracks and Wheels are now fully destroyable which enables players to inflict more granular damage to vehicles. For wheels, depending on the vehicle, they can be taken down by small arms fire, while tracks and APC wheels require .50 cal or greater. With each wheel that gets destroyed, more friction is applied, reducing the vehicle’s maximum top speed. The destroyed wheel’s rim still functions at reduced drive effectiveness. In addition, the vehicle will lean over as the supporting wheel is now gone. With tracks, as each gets destroyed, drive input from that track no longer functions. That means that if both tracks get destroyed, the vehicle is completely immobilized.

We’re introducing a new specialist role focused on demolitions, sabotage, and construction. The previous infantry deployables that were associated with some Riflemen roles to the Combat Engineer role, as well as outfitting them with anti-tank mines, and small demolition charges. The intent for this role is to perform quick demolitions on deployables and light vehicles, as well as ambushing vehicles and enforcing set no-go zones with their anti-tank mines. Combat Engineers can also build and destroy deployables faster compared to other roles.

For the Militia and Insurgents, the role that the Scout previously played will now be given to the ‘Sapper’. In addition to the normal combat engineer loadout and abilities, Sappers will be able to lay IEDs and decoy rocks. Note: Scout role will return in a future update with new inventory items. 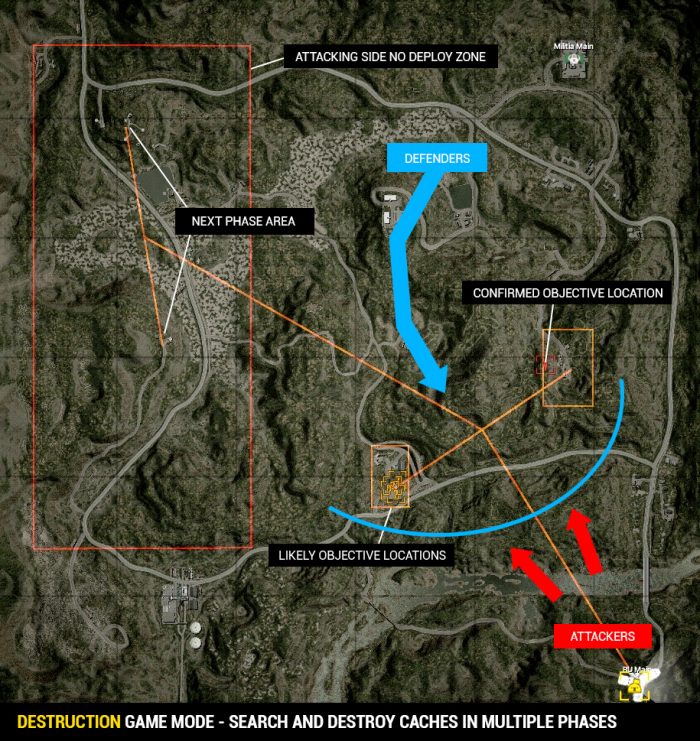 This the initial release of a new objective-based cache hunt game mode where Attackers have to destroy caches in multiple phases. Layers can have either 2 or 3 phases with 2 caches in each phase. There is a 3-minute delay between each phase to minimize rushing potential.

Cache locations are randomized within specified zones, requiring attacking teams to search the zone to locate the objective before destroying it.

Attackers get a 50 ticket bonus for each objective destroyed, as well as the round timer being extended. Defenders get a -10 Ticket penalty upon objective loss.

Defenders win the round if the Attackers do not complete all phases within the time limit, or run out of tickets.

Expect continued balancing and tweaks for future Destruction-layers based on gameplay feedback.

Ticket bleed has been added back to all AAS and RAAS gameplay layers. This should give back a little more incentive to push to the next enemy point.

Why it was removed?

In past ticket bleed was too powerful, and also was triggering on the central flags, resulting in King of the Hill style of gameplay, and also incentivizing players to rush from the start to the central objective that was providing a ticket bleed bonus. In the end, it led to the repetitive gameplay experience, rounds were played in almost exactly the same way, which clearly wasn’t our goal & intention.

In addition, ticket bleed was not a very transparent mechanic, as it didn’t have any UI representation. We are reintroducing ticket bleed mechanics into AAS/RAAS game modes, with improvements, based on our previous experience:

The Fog of War has been added to all RAAS layers. Under the Fog of War, the first Capture Point is known and the next point is revealed once your team has fully captured the current objective. We believe this should help mechanically increase variability in gameplay, especially at the beginning of a round, as well as help differentiate between Random AAS and standard AAS.

In A12 we have layers with Capture Zones that can be quite distant across the map, which can cause transportation problems and extended round times. RAAS Lanes will help group up the flow of each Capture Zone to be relatively close to each other, allowing a more natural flow to gameplay.

Added the ability for Squad Leaders to place rally points remotely next to other Squad’s Rally Points. This request is only available when the Squad Leader is dead. This is intended to allow Squads to have the flexibility to reinforce friendly Squads separate to FOBs. This is experimental.

When a player is sent to incapacitated state, they will now not be put into the Insta-death state if they reach 0 HP within a certain time of being revived. Previously (Alpha 12), if an incapacitated player was revived, then sent to 0 HP within one minute of being revived, they were sent to the Death screen with no chance of reviving. In Alpha 13, players can now be revived regardless of the duration since the last revival.

We noticed this Insta-death mechanic was a very common occurrence and distracted players from the gameplay flow. As a result, we have decided to change the mechanic with the goal of creating a more enjoyable experience that is not overpowering. We believe the abundance of area effect weapons, limiting bandages from non-Medic kits, as well as the penalties and low health resulting from reviving from an incapacitated state will prevent the changes from having an adverse effect.

We hope this new change has a positive effect on game flow and proximity-based teamwork within squads, as well as the team at large. 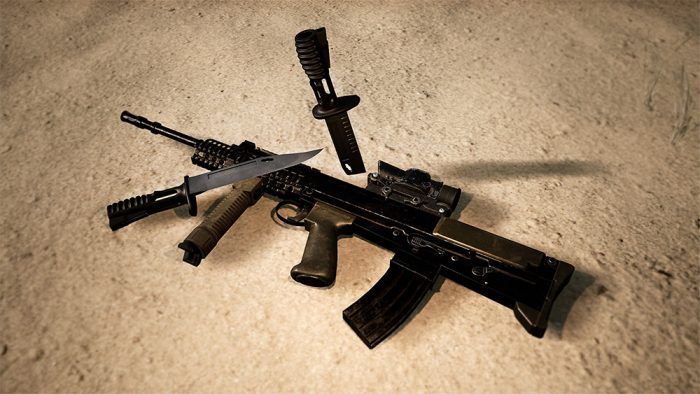 Our observations showed that standard APC of Russian Ground Forces currently had too low of a survivability rate in engagements with enemy armor. One reason we suspect is the lower level of armor and how that interacts armor penetration system works. Most of the time BTR have no chance to escape unexpected frontal engagement due to the fact that it suffers heavy damage on the engine due to the penetration of high caliber rounds to the engine.

We have removed the Map Pinging feature that squadmates could use to send their Squad Leader a ping by right-clicking on the map. This feature was not the intended route we wanted for player communication and we did feel this was not the right approach for squad comms. We may re-evaluate this and try something different, such as limited use of enemy map markers for FTLs, for example.

The FTL markers will have their rangefinding function removed. We felt that this rangefinding feature became the most prominent reason why Squad Leaders were assigning Fireteams rather than their intended purpose.  (To organize the squad to use effective fire and maneuver tactics.) Often the squad leader would only assign one unit to a Fireteam (commonly the LAT/HAT/UGL/Marksman), and in fact, squadmates in those roles would ask/demand for them to be assigned that role without ever taking any leadership role responsibility.

This change will likely lessen the amount of long-range mobility kills on tracked vehicles, so armored vehicles will be encouraged to engage targets at longer ranges. Experienced LAT users with excellent eyeballing/map reading/binocular ranging skillsets will be encouraged due to this change. Teamwork within squads to triangulate positions of enemy armor with the help of recon/spotters should also become more prevalent with this change.

From our perspective, the main negative impact of removing the FTL rangefinder will be for the mortar operators. Mortar effectiveness increased with the FTL rangefinding feature in A12, but squad communication decreased. Mortars will still be quite deadly, however, even more so with the HE radius increased.

More effective use of the mortar will likely come when used in a small purposeful squad with the squad leader placing markers the SL Marker on targets. (The SL Marker still retains a rangefinder.) External Mortar Calc apps may still be used to be very effective at pinpoint target accuracy.

In a future update, we would like to implement additional functionality for the “Fire Mission: Mortar” request marker that a Squad Leader can place on the map. When occupying a Mortar Tube, all friendly “Fire Mission: Mortar” icons would show their bearing and range on the Mortar players compass. We also have a few other ideas to increase Mortar useability in lieu of the FTL Marker, which could include allowing Mortar Tube operators to place their own single “Fire Mission: Mortar” map marker, allowing them to gauge range even without requiring a marker from their squad leader.

Additionally, we would also like to add a rangefinder to a handheld binoculars item for the Squad Leader kit. This may be connected to other gameplay elements and may be subject to change. 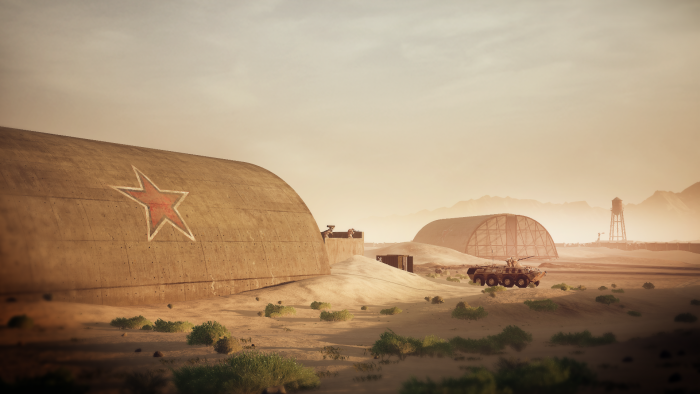 Unfortunately, the Unreal Engine 4.21 upgrade changed the way localization is managed. As a consequence, a lot of the translations have been broken going into Alpha 13. Our plan to address this is to actually push a full localization pass to a later date in the year when we are much closer to full release and are locking down all the text that will need to be translated for the game.

RCON functionality for Linux server is temporarily non-functional in Alpha 13. This is a known issue and we’ll continue to work to resolve this. We apologize for any inconvenience.

Due to significant updates to our Unreal Engine implementation (4.16 -> 4.21) and modding framework, existing mods will need to be uninstalled. Mods will need to be recooked to ensure compatibility with Modding 2.0 — more information will be made available soon.

We may have a contender for our longest patch notes yet. Congratulations on making it to the end! Now get out there and get playing! We’ll see you on the battlefield, squaddies. Alpha 14 when?!