We had a hot minute to sit down with Modding developer Zak “StrangeZak” Strange and get some of your Squad SDK and Modding 2.0 questions answered. With features like in-game downloading, smaller file sizes, and self-updating, it’s sure to see some of your favorite mods popping up on even more servers. Let’s jump right in!

Romagnolo: From a player’s perspective, what are the necessary steps to join a server with a custom map? Does it download in-game or do I have to be sent somewhere else to download the map? Is it planned to be all automated? Thanks and keep it up!

StrangeZak: With Modding 2.0, all mods download 100% in-game now. There’s no reason to go into the Steam client, find the mod in the Workshop, then download the mod, *then* find a server anymore. When you click on a Modded Server a box will pop up (if you don’t have the mod installed) that will provide a brief summary of the mod, its rating on Steam, and then a prompt to begin downloading. Once all mods are downloaded, you will then join the server queue.

Anonymous: What limits are there to downloading a mod on server join? (Layers only? Up to maps using base assets? Or including total conversions even?)

StrangeZak: There are no limits at the moment. Any mod can be downloaded in-game.

A curious bloke: Would you be willing to partner with modders in order to bring content like maps, assets, and fractions to Squad quicker?

StrangeZak: We’ve already done a bit of that and, of course, we want to do more. For example, look at Skorpo, Al Basrah, Assi’s scope, Axton’s grass shaders, and others. There’s some amazing talent in the modding community and we’d love to continue supporting it. Kiefer: Are you seeing results on the efforts to allow in-game downloads of map layers/mods? Will this allow for automatic downloads of required mods on server join (or per map change)?

StrangeZak: Yep! Fortunately, things on all fronts are working well. Players will be able to download modifications 100% in-game now and you will not need to restart the client when the mod is downloaded.

Kiefer: How will this download system interact with Steam Workshop mods/subscriptions?

StrangeZak: When you start a mod download in-game (after accepting the prompt, of course!), it will do two things: First, it will subscribe you to the mod so you don’t miss out on future updates. Second, it will instantly start the download via Steam instead of waiting for another app to finish, which is Steam’s usual behavior.

After you launch the game, it will now check for mod updates so you’re always good to go — something that doesn’t happen via the Workshop method previously employed. If any mod is out of date, the client will then update it for you, and you can get back to gaming.

DanielNL: Why does Epic Games have to analyze every new Squad SDK version before it can be released to the public?

StrangeZak: First and foremost, they just aren’t going to distribute something they aren’t sure that works. The engine is their baby, after all. Next up, they also need chunk out the 90gb+ SDK out to their CDN — there’s a lot of people downloading the updates! Ultimately, they’re responsible for making sure the content is okay to distribute and then doing so, and that presents its own challenges.

Colsey: Will audio mods be able to be implemented without requiring the server/everyone to be running the mod at the same time? Will overrides be doable? As in, replacing an existing audio asset with a new one while sharing the same name?

StrangeZak: Unfortunately, overrides will not be possible in modding 2.0. I’ve looked into them, but they would just extend modding 2.0’s development lifecycle to take much longer. Something to investigate in the future. (No no, not three weeks — go enjoy your holidays.)

(B) Antol: Will Modding 2.0 bring cross-modding to Squad? For example, will it be possible to run a few different mods at one time? If not, are there plans for that?

StrangeZak: This is already possible, but it does require you to have the source to the mod that you will reference. There’s not really a better we can do this right now since there’s no way to reference an already PAK’d modification.

StrangeZak: Isn’t this all already exposed? Think we had to modify all of that stuff with SquadBR  and it worked fine. (Editor’s note: Let us know if you’ve found a bug!) granQ: Will the content for maps be “frozen” (considering paths) now and available for our custom maps or should copy them to our own maps? What is the recommendation?

StrangeZak: Content on Squad is never frozen, especially with the effort of pushing for 1.0 launch next year. Lots and lots of stuff will be changing over the next year. My recommendation is that you always copy the content to your own mod to keep it safe. Backups are always your friend!

ArminStudios: Would it be similar to joining a Garry’s Mod server, as an example? What I mean in the sense is that instead of having to download the mods prior to joining a server, you’ll be able to join normally, but you’ll be downloading the mod in the process. Is that going to be the case?

StrangeZak: We tried doing this method, where you only need the mod downloaded that’s running on the server. Unfortunately, it just did not work with how Squad switches maps. There’s no actual disconnect where you don’t have a map loaded, and we would need that to download and mount a mod before you load into the next map.

The options were players would have to sit through the longer loading screen every time, or will the game remembers and keeps the servers mods installed to the client, so only the initial connection is the longer wait.

Mods are downloaded once, you will not need to redownload all mods everytime you connect to the server. Also, connection times aren’t nearly as long with Modding 2.0 as mod size has decreased significantly.

ArminStudios: Would there be a message that states this to a player wishing to join a modded server, informing them with details of what to expect?

StrangeZak: Yep, we don’t auto-download it, per se. You still need to accept the prompt that shows you all the details on the mod, which provides the summary from their workshop page, the rating, a screenshot, and the mod name.

Stanley / [FLV] BlackGaming [GER]: Is it easier to modding in 2.0 for newbies?

StrangeZak: Not really, not much has changed from the modders side.

(Editor’s Note: There are some really great resources on the wiki, as well as the Modding Discord server though. We all start somewhere!) Beefie: Will whitelisted servers make it into 2.0? Also, will players be able to join servers and download the mods without having to be subscribed to the mod?

StrangeZak: Yep, we will be providing some sort of an approval process for mods that wish to be whitelisted. We’re still working out the details and requirements, which may vary from project to project. We store all these mods on our “master server” and, once approved, your mod will instantly be moved into the whitelisted section of the server browser with no work from you needed. We’re looking forward to seeing more mods getting some playtime.

Beefie: Will blueprint exposal continue to be done by request? Or will that become a thing of the past with modding 2.0?

StrangeZak: Yep, we can do another round of requests before Modding 2.0 is released.

Beefie: Will mods continue to get exposal through The Wrench? What about players who do not read The Wrench?

StrangeZak: Yes, of course. =) (Editor’s Note: You’ll have to pry The Wrench from my cold, dead hands! We love modders. Getting more content into Steam is an option too!)

Reptio: If a gameplay mechanic, such as dragging, was to be properly enough coded in as a mod would there be a possibility of it making it into the game? Or would the accepted mods still stick to being maps and factions, etc?

StrangeZak: Honestly, probably not. Almost all of the major mechanics in Squad right now are written in C++ for performance reasons, and with Modding you only get Blueprint access. (For obvious reasons).

Reptio: Will it be possible to mod in completely new animations from scratch?

StrangeZak: This is already possible! Check out the Canadian Forces model; they just use our rig and skeleton (I think), and modeled a new soldier! 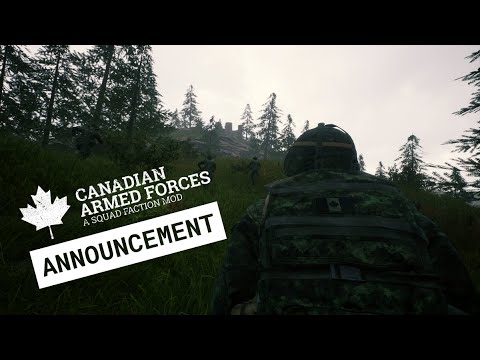 And there you have it, Squaddies. We’re sending Zak off for some beauty sleep now — there’s a lot to do in the new year! A huge thank you to everyone who submitted a question. None of this would be possible without you and the stellar Squad modding community!