Winter may not be coming for all of us, but at least partly on the northern side of this cute little blue ball the days are getting shorter, nights are getting colder and the people spend more time in front of their PC rummaging around inside the Squad SDK. So, let’s see what this community came up with in the month of September before hibernation kicks in!

Join us on the Community Modding Discord where you can join discussions and meet the modding community. It’s a great place to share your ideas and passion with like-minded people that will be happy to help you along the way. 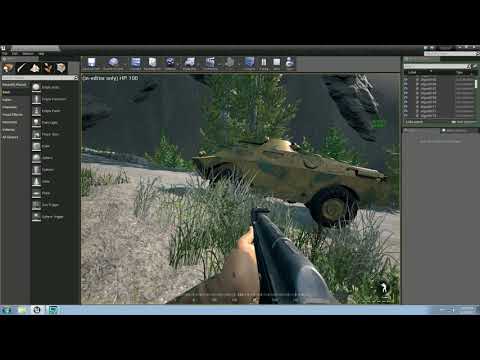 Based around the regions of the Hindu Kush mountain ranges between Afghanistan and Pakistan, this map caters to everyone who enjoys fighting in my rural areas as well as people with a taste for urban combat. It has been made with an US vs. Insurgent layer in mind and something for all the fans of the Afghan theatre. Made for the French Forces Squad mod, this work-in-progress weapon is already a beauty. For the modeler, Pawin, it was quite an unique experience because as everyone who tried to model a machine gun already knows: these things are complex and are filled with a lot of challenging components. A regular appearance in these modding recaps, Socrates keeps on working on his Vietnam-themed map centered around the Khe Sanh Combat Base in South Vietnam. His focus for this month were the farms, dense jungles, and the trenches at the center of the map. From time to time, you can catch him streaming the development of the map on his Twitch channel for everyone to enjoy, so keep an eye on the Modding Discord to see it. Amazing to see all the pieces coming together! Al Bab is a region in Syria not far from Aleppo, about 30 kilometers south of the Turkish border. SQ-MAK AVCI plans to develop a Turkish armed forces mod around this map and it’s off to a great start!. So, let’s hope we can experience urban street combat between the Turkish Armed Forces and Insurgents soon. Already seen in a previous edition of The Wrench, CreativeRealms has made significant updates to his West Bank map since we’ve last seen it. He reworked the lighting and ground materials, as well as added some terraces and put some foliage down. The olive trees will provide great cover for any squad moving down the hill in its shadows. There’s also a 360-degree view for everyone trying to get a grasp of the map here.

Elitelurker is working on a map in a hilly region, filled with lush, but dry river banks, very steep hills, and winding roads all over it. The varied terrain should challenge squads with a variety of tactics and it will surely prove a challenge for designated drivers, too.

A little sumtin’ sumtin’ by Zeno