September has sure gone by quickly hasn’t it? Over here in Squad Dev-land we’ve been hard at work improving the Alpha Version 7 edition of the game (with the latest hotfix being 7.6, notes are viewable here.), as well as the next Alpha Version 8 where the primary focus is going to be on performance optimisations. We still have lots of tinkering left to do, but rest assured the team is 100% committed to improving your in-game experience. Without any further ado!

We now update the server browser asynchronously! In Alpha 7 and before, when you refreshed the server browser, the Steam Subsystem would wait until all the servers have been pinged and responded before displaying any servers to you. Now, we start showing you servers as soon as they respond to pings. This makes the server browser far more responsive to the player, and just feels better.

One critical part of developing Alpha 8 has been pouring over performance data from Alpha 7. Under the hood in Alpha 7s development, we added a number of additional performance reporting metrics to help us dig into what areas needed optimization work the most. Using that data, we have been working hard on our performance bottlenecks, or the areas of the code where we are the most inefficient. In addition to profiling under a variety of conditions, we have been profiling Intel and AMD side by side under the same setup to make a concerted effort at improving our AMD performance. Shout out to the guys over at Coconut Lizard for hosting an amazing blog with a number of low level Unreal Engine optimizations. We trawled through the material they have and integrated a number of impressive performance improvements. Squad now starts up about 2 times faster and map loading is noticeably faster as well. Thanks Coconut Lizard!

This month has been focused on doing improvements on the Radial Menu and Compass based on community feedback and the development roadmap. Our prime focus here has been to begin the rollout of the unified UI we have been working internally as well as improving usability and performance of the underlying code. We are not done with the radial menu nor the compass, so there is a lot to look forward to.

The radial menu is now implemented with much fewer elements (Action Icon, selection icon and status icon) which allows us to do much less processing per widget and due to the simpler elements we have also been able to make the radial menu transparent which was a big wish for placing markers in the world. The compass has gotten a code overhaul and all code is now entirely in C++ with a much more efficient implementation, and we are updating the artwork (layout, size, and ui elements are all subject to change) and features in this iteration, including the addition of markers to the compass.

Lastly we have rewritten the way that we update player/vehicle/flag icons on the map as well as how we track squads for the menu which has improved the execution time of the menu tremendously, this together with almost being finished with our c++ port of the spawn menu should help the speed we can implement UI features and the speed we can execute these at.

Heaps of work has been done to optimise the current animation system, including moving a lot of the Blueprint over to C++, dramatically reducing the amount of processor time required to run animations on each character. Multiplied by the current player limit of 72 players, the savings in a full server look to be very promising.

As last additions to the current animation system, we’ve added a new first person crawling animation. Visually the movement should look a lot smoother and also slightly affect your accuracy while on the move.

Another addition is a slight head tilt in Third Person while your aiming down the sights. You will finally able to see if the enemy is aiming at you and about to shoot you down.

We’re excited to show off the beginnings of our British Armed Forces faction. A lot is planned in terms of art and assets for this faction, so please stay tuned to a later blog post about the Brits and how they will be integrated into the game. The SPG-9 is a Russian recoilless gun firing a 73mm rocket assisted projectile, capable of defeating most light and medium armoured threats. It is extremely accurate and with a well trained crew, can present a serious threat to enemy armour. We are planning an emplaced and a vehicle version of this weapon. While we’re on the subject of rockets, we’re planning our next level of heavy anti-tank weapons in the form of the FGM-148 Javelin Anti-Tank Guided Missile. Capable of direct fire and also a unique top-down attack mode, this is a serious piece of modern hardware used to take down the heaviest of armor. This particular weapon system is still a while away, but we just couldn’t resist showing this awesome piece of kit off.

Basically a helicopter rocket pod mounted to the back of a technical, this system is capable of launching 32 S-5 dumb-fire rockets capable of dealing significant damage to infantry and light damage to vehicles. However its psychological impact cannot be denied. Due to the nature of its firing system, it is extremely inaccurate and most useful in suppressing a large area rather than killing specific targets. Our environment team has been bolstered with a few more talented artists, and is working hard at creating more assets to flesh out the Eastern European theatre. As we like to work in iterative passes, this past month we moved all of our maps to a new lighting system that makes use of photographic skyboxes. Down the line we hope to keep improving our lighting and atmosphere in our maps. Our talented modders have been real busy behind the scenes working away at their own total conversions and projects. They have their own version of Monthly Recaps in the form of The Wrench, so please check out the write up and support the work of the next generation!

The Post Scriptum mod developers have also released their first Developer Blog showing off for the first time their game in motion with characters, weapons and even vehicles! We’re just as excited as they are that so much progress has been made on their end when it comes to mod development. 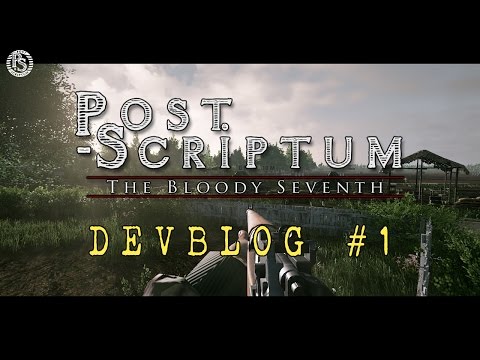