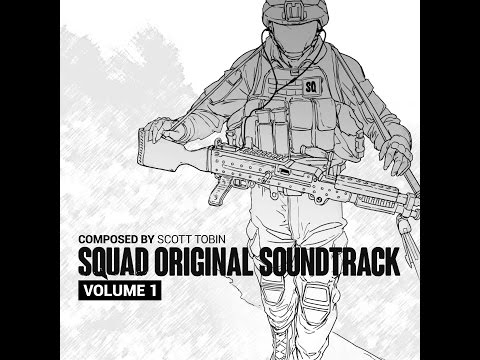 We have a very special announcement for our music lovers, Volume One of the Official Squad Soundtrack is available NOW for all our Founders as well as for general purchase via Steam. Featuring 10 tracks totaling 45 minutes of music, this first volume is intended to give listeners and fans of the game an audio record of where Squad has come from and also where it will be heading into the future.

To read more on the composer and history check out our previous post with Scott Tobin.

We also have a bit of a foreword from Scott himself:

Scott: “Hi all! I am very excited to see the release of the first Squad Soundtrack. Here are a few notes and thoughts on the soundtrack. The Squad soundtrack is a blend of ambient and orchestral genres. This was both a personal choice and an artistic in order to set the mood for the game.”

“Volume one follows a narrative and I took inspiration from a few of the maps in Squad. The soundtrack contains 10 original songs, 2 of which are bonus tracks, the main theme from the early release and an instrumental version of Lost Squad. You will hear I utilised spacious reverbs, bowed instruments, and custom sounds in order to enhance the ambient open world setting in Squad. My intention for this album is for it to be listened to as background music. One of my influences for this soundtrack is music producer Brian Eno. “

“Ambient Music must be able to accommodate many levels of listening attention without enforcing one in particular; it must be as ignorable as it is interesting. – Brian Eno from the linear notes on the Music for Airports album.”

“I would like to thank my colleagues at Offworld Industries for supporting me as I continue to make music for Squad. I would also like to thank the kickstarter backers, without you we would not be in the position we are in now. Finally I want to thank everyone that has supported me over the years, going to back to the days of Project Reality.” Album Art by Chuc and Ajax