It’s the first Monthly Recap of the year! We apologise for not putting one out at the end of last month, but considering it was the Christmas break and we’re also coming hot off the heels of our epic Early Access release on Steam, we just didn’t have enough goodies stocked up for you all! Anyway, lets get to business.

Our Lead Effects Artist, Bruno, explains the changes behind a number of effects in version 4, in particular the way smoke from smoke grenades behaves and a new approach to depicting muzzle energy. 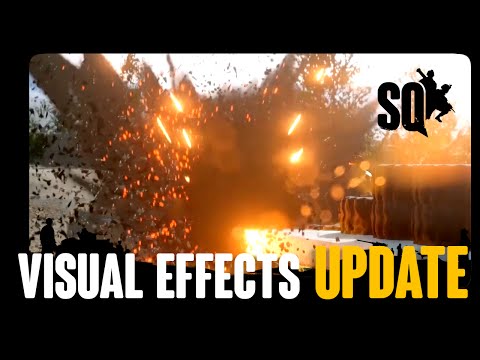 We’ve been running tests on Truesky for Squad and we’re pleased to say that the results have been stunning. We’ll let these test screenshots speak for themselves. New Weapons in the Pipeline

We have a number of interesting and unique weapons that are nearing the end of the art pipeline, (their actual implementation into the game is still TBD)

A 23mm rifled shotgun originating from the Soviet era, the KS-23 fires shells that are considerably larger than most typical western combat shotguns. A classic World War 2 era Russian sub-machine gun that has survived into the modern era, the PPSH-41 is capable of delivering pistol-caliber ammunition at incredibly high rates of fire. We are expecting to include two different kinds of magazines when this weapon ships, a 71-round Drum, or a 35-round box magazine. Featured previously in a monthly recap, this nasty bit of kit is now fully textured and ready to be implemented into the game. Under the advice of our new Army advisors, work has started on the new US Army soldier models, progress has been steady since the Christmas break but we expect it to pick up very quickly again. Our talented environment artists have also expanded the set pieces and static environments for our mappers to utilise in their maps, which range from new houses and two storey blocks for the European theatre, all the way to a full sized train depot. We have started roughing out our next map, Gorodok. This map will be set in eastern Europe on a clear sunny day and will focus on open gameplay in anticipation of vehicles. Gorodok is still in its very early stages so stay tuned for further developments. The built-up area has been at least doubled in size, and more work has been done in detailing and the creation of unique crop and business areas going to the fringes of the town. This particular update will not be in the next Alpha version but another one down the line. We hope you all enjoyed our little presentation for January. Version 4 for January is coming through the pipeline as we speak and will be released very shortly! So stay tuned to the website, forums and our Steam Page.